Creamy, ultra-fresh, homemade Soy milk, without any added sugar or preservatives. This Soy milk is high in protein,  plant-based, “non-dairy milk” perfect for  lactose intolerant or even for some who like to have it has an healthy alternative. Homemade soy milk is easy to make and is much more economically than the store bought one. 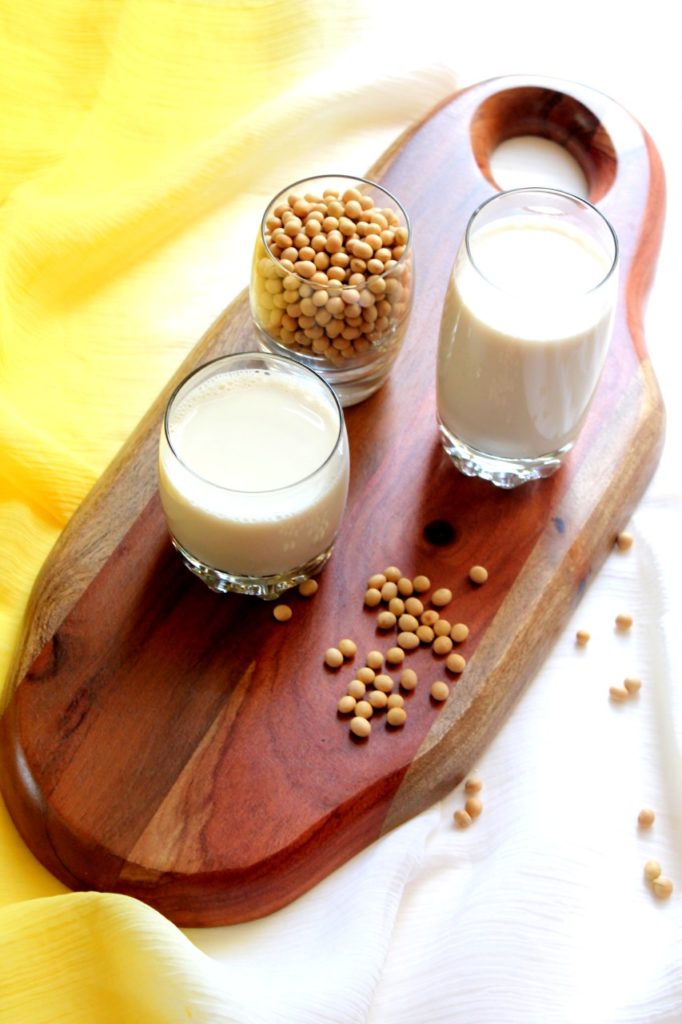 Soy milk, also known as soymilk, is a plant-based non-dairy beverage, often used as an alternative to cow’s milk. It is made with soybeans or soya bean, legume native to East Asia, widely grown due to its edible bean and various uses.

Soy milk is produced by soaking and grinding the soybeans, the mixture is boiled until raw smell of soybeans is no more. Strained to achieve smooth, creamy texture soy milk.

Soy milk is a good source of calcium and protein. It has a savory, beany flavor as compared to cow’s milk which is naturally sweet, due to lactose (sugar that’s in milk).

Soy milk, almond milk and rice milk are all vegetable-based, “non-dairy milk” used as an alternative to dairy milk by individuals who are lactose intolerant or are vegan. It is also consumed by some for its health benefits.

MAPLE SYRUP or HONEY or sweetener of your choice ( optional )

HOW TO MAKE SOY MILK

You can make the soy milk in INSTANT POT or on a stove top, the process of making homemade soy milk stays the same. For stove top version, use heavy bottom pot for best results.

Soak the soybeans for 24 hours (or up to 36 hours) in 3 cups of water, change the water half-way through (around 12 hours of soaking time). Drain and rinse the soybeans.

OPTIONAL – rinse the soybeans with water couple of times. With each rinse, rub the soybeans between your palms, the skin falls off easily. Rinse and continue this process for 3-4 times until almost all the skin is removed.

Note: I prefer removing the skin, I think it makes the soy milk more creamier and rich. 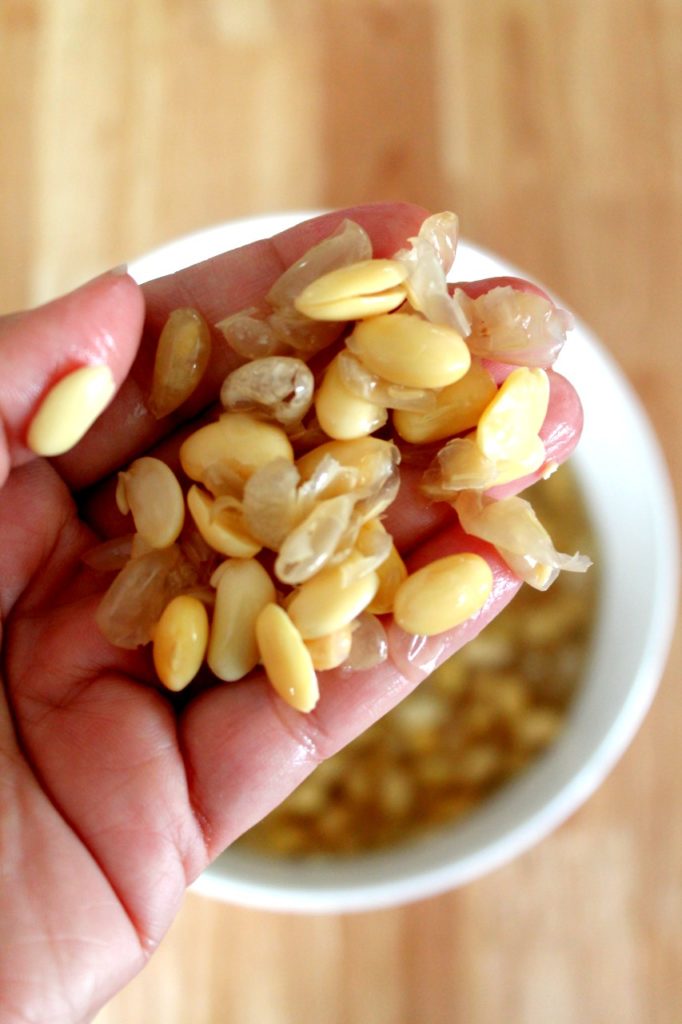 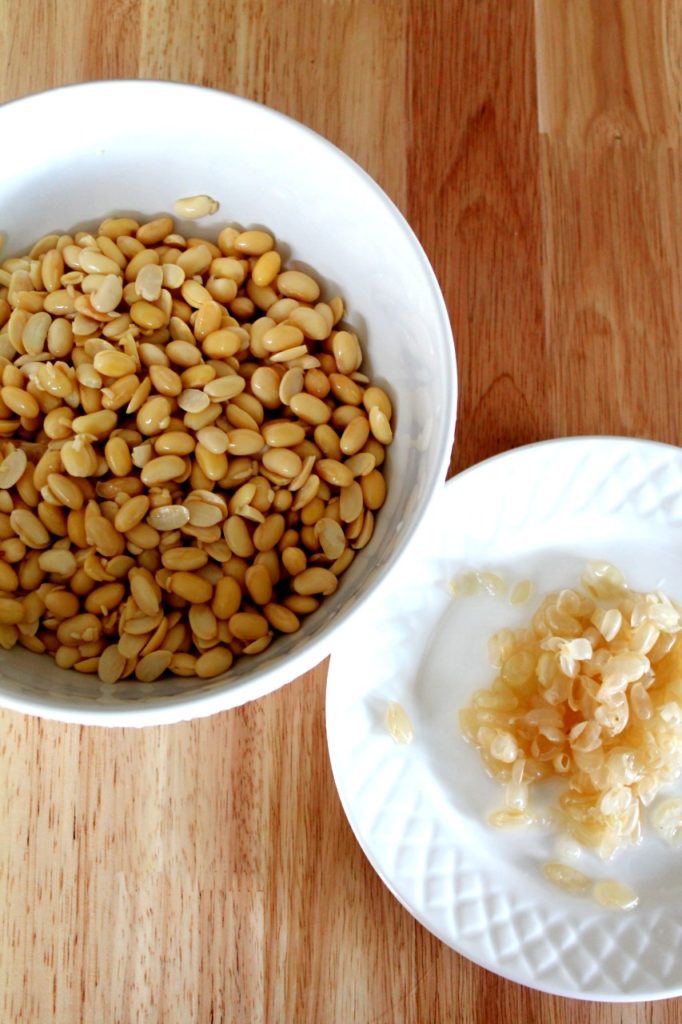 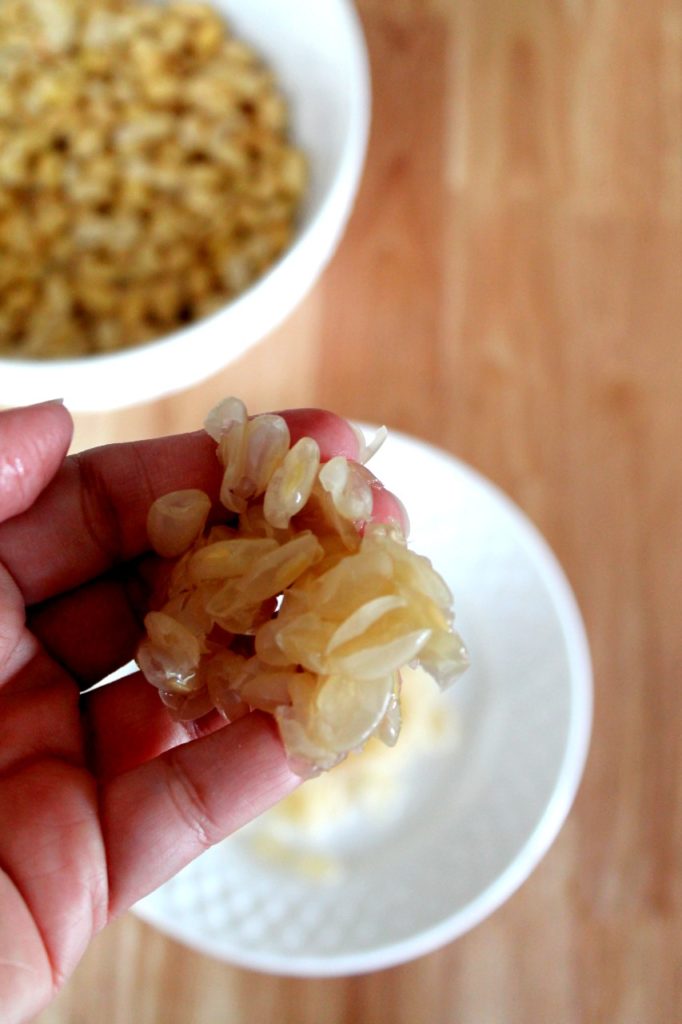 In a blender jar, add the soybeans and 2 cups of water. Blend the mixture to a smooth puree, using the hightest setting on the blender.

Note: Depending upon the size of the blender jar, you may have to work in batches. 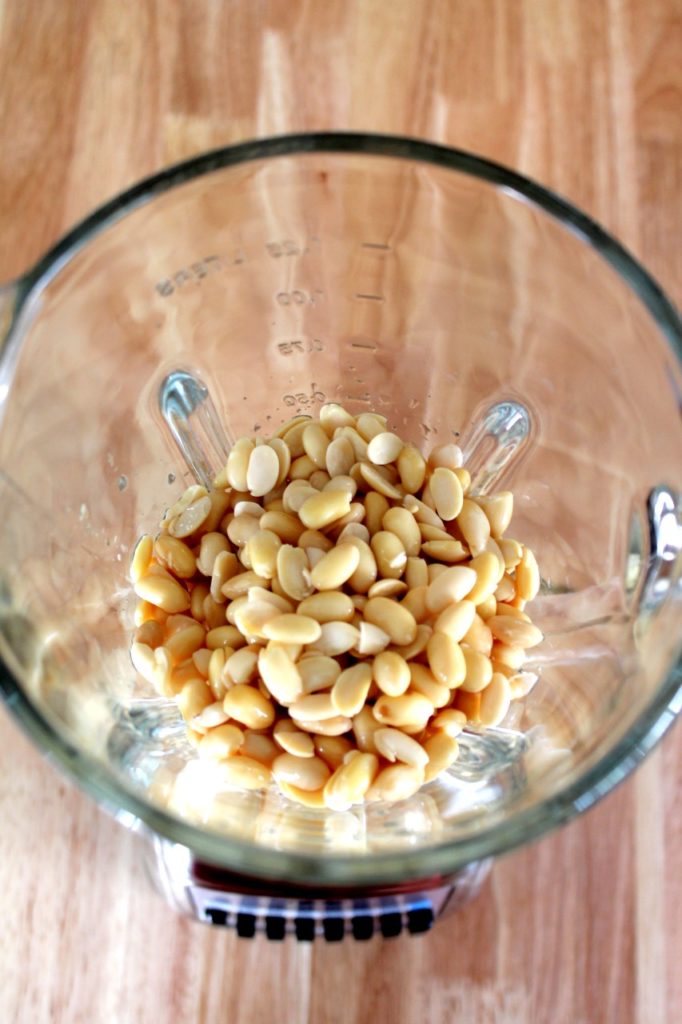 Add the soybeans puree and 5 cups of water in the inner pot of Instant Pot. Mix well.

Turn ON saute mode (more). Let the soybeans mixture come to a boil, stir occasionally with the spatula.

Note: Stir the mixture occasionally to prevent mixture from sticking to the bottom of the pot. 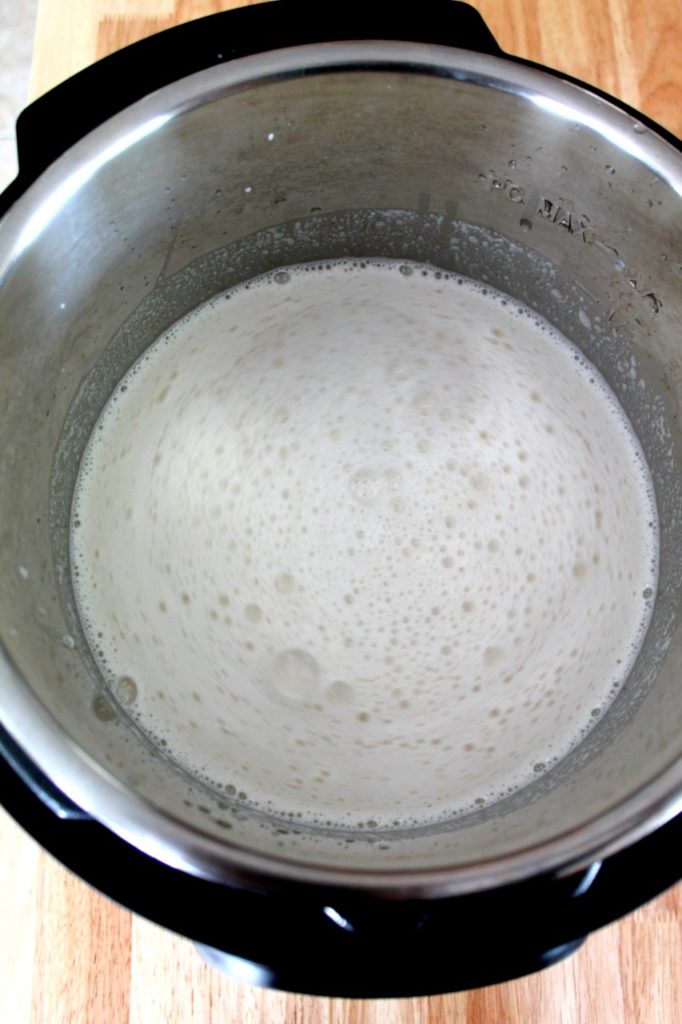 Once the mixture has come to a boil, it rises quickly and you will notice a thick layer of froth develop on top of the mixture. Using a ladle, skim the froth and discard it. Mix well and continue cooking.

From this point, it takes around 10-12 minutes for the soy milk to form. Keep stirring the mixture occasionally.

Once the soy milk is formed, you will notice the froth has settled down. There will be a thin layer of cream on top of the mixture.

Using a ladle, skim the cream ( known as Yuba ) and froth and discard it. Turn OFF saute mode. 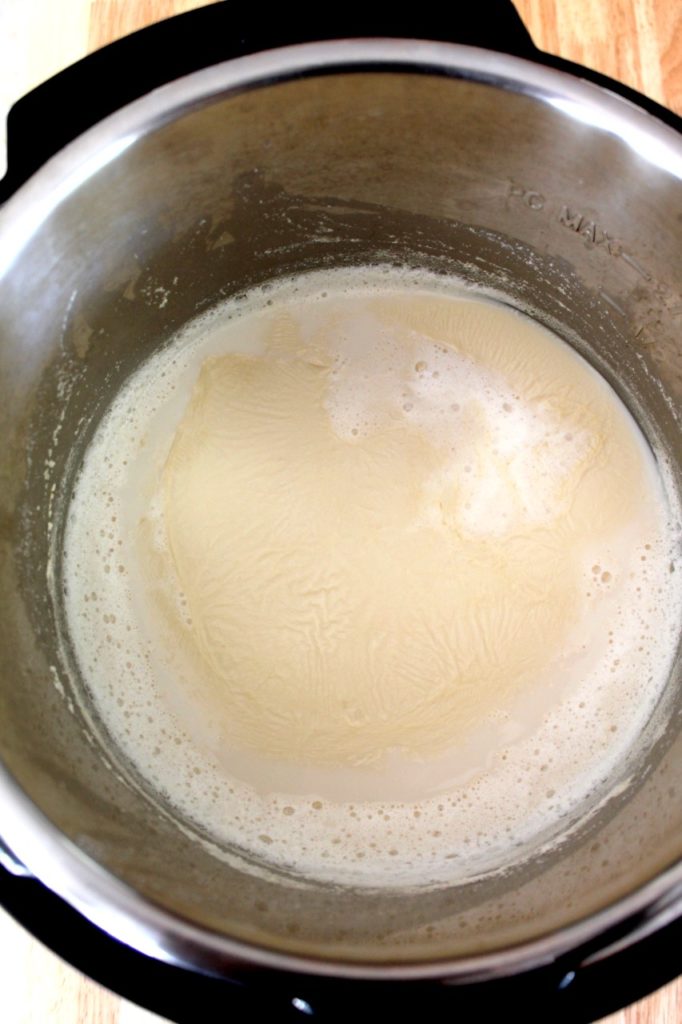 Let the mixture come to a room temperature, or until safe to handle. In the meantime, prepare a wide-mouth pitcher, and line it with a nut-bag or a fine mesh strainer. 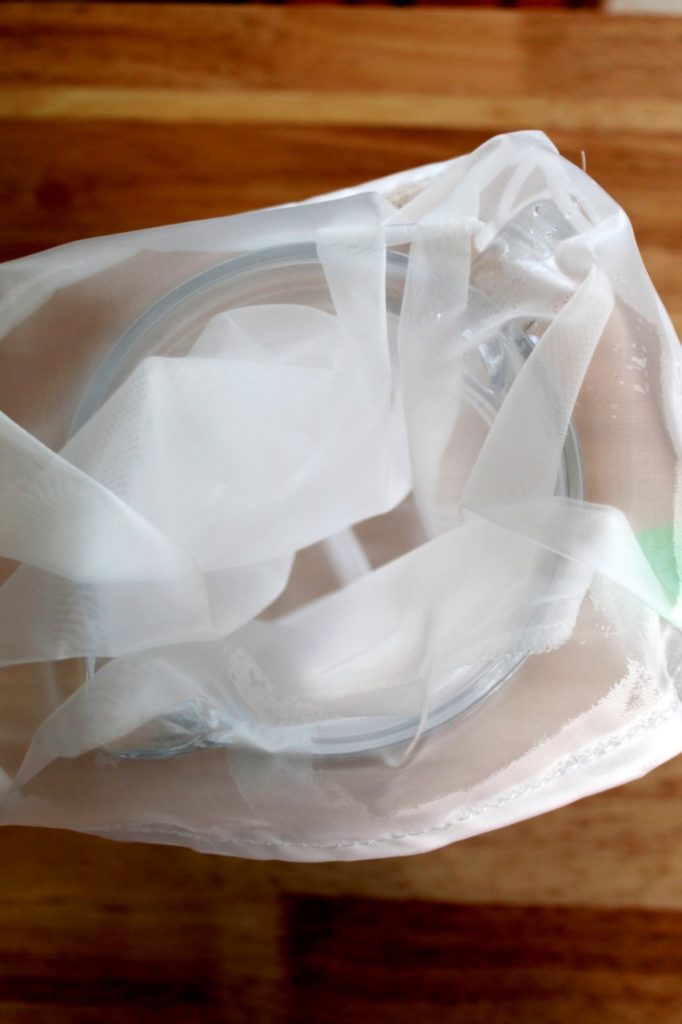 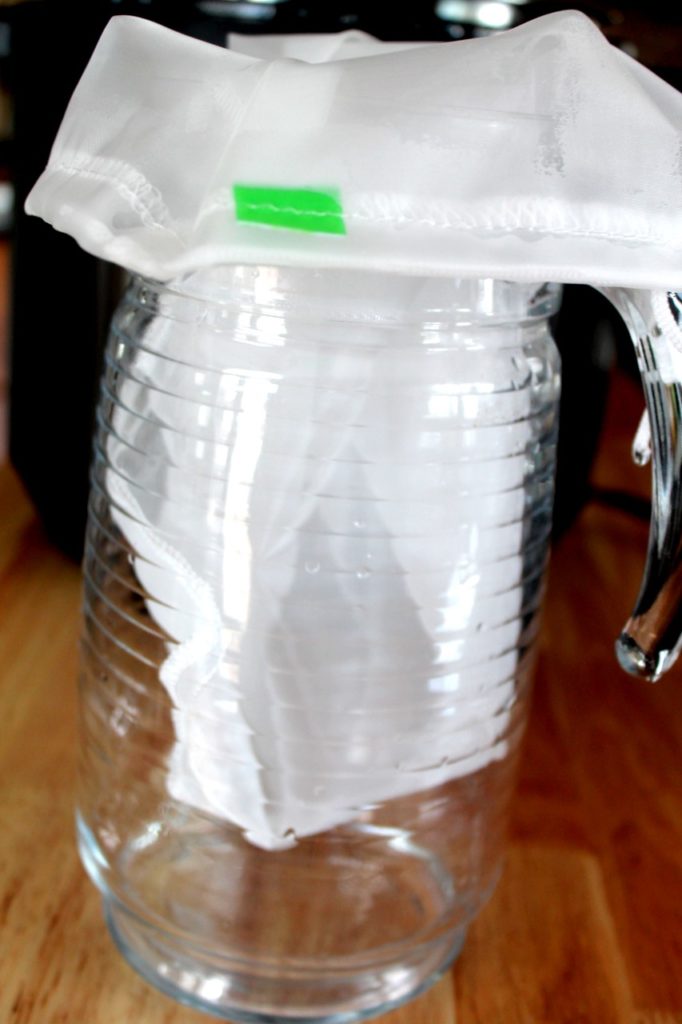 Carefully, pour the mixture through the nut-bag. Gently, squeeze the nut-bag with your hands to get the most of the soy milk. Once all the milk is strained, add salt, flavoring as per taste – vanilla essence, maple syrup or sweetener of your choice (optional). Cover the pitcher and refrigerate the soy milk.

Note: Do not skip on salt, it acts as a preservative.

Soy milk stays fresh for up to 5 days in the refrigerator. Shake well before using.

This recipe yields around 6 cups or 1.5 quarts of soy milk. 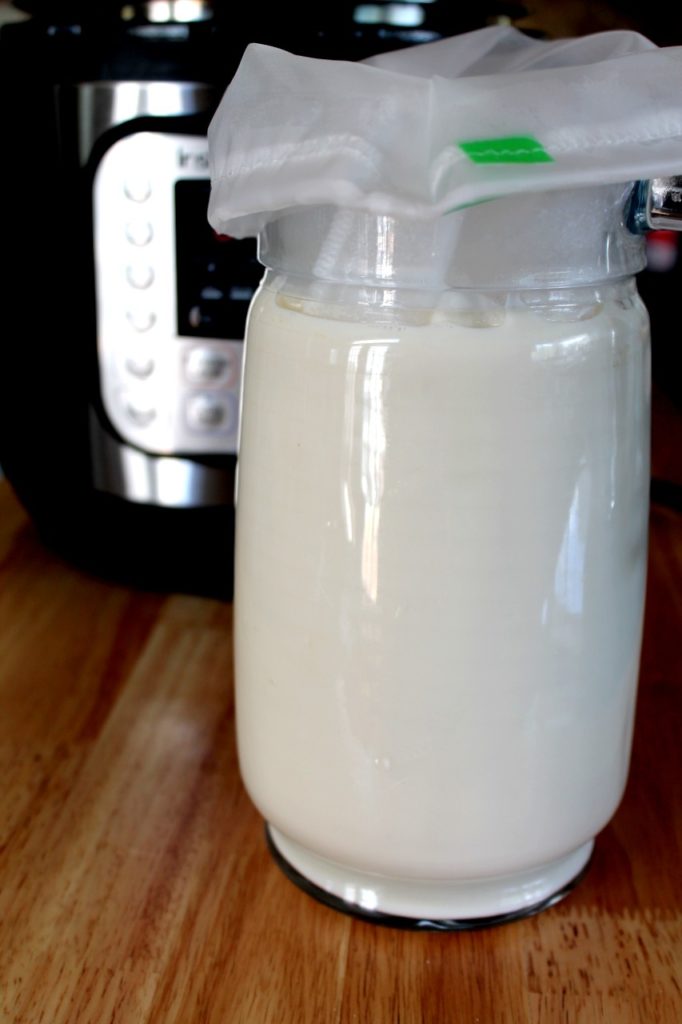 Follow the recipe as discussed earlier. In a heavy-bottom pot, bring the bean mixture to a boil. Rest of the recipe is same as Instant pot.

Make sure you start with a clean, dry pot, if you have an extra INSTANT POT SEALING RING, use it. Use a clean, dry NUT MILK BAG, PITCHER, and a clean spatula.

Use good quality soy beans. The taste, flavor of soy milk depends upon the quality of soy beans.

Use a good blender, to blend the beans to a smooth puree.

Stir the soy bean mixture occasionally to prevent any mixture sticking to the bottom. When stirring the mixture, make sure the spatula touches all the way to the bottom, to mix the bean mixture.

Once the soy bean mixture comes to a boil, it rises quickly, discard the foam and continue cooking.

The foam eventually settles down and you will notice a thin, delicate layer known as yuba formed on top of the mixture, that’s when the soy milk is ready.

Use a good quality NUT MILK BAG or fine mesh strainer to strain the soy milk.

Do not forget to add a pinch of salt. Salt acts as a preservative.

You can store the soy milk in it’s natural form or add flavoring to suit your taste. For details refer to FAQ ABOUT SOY MILK 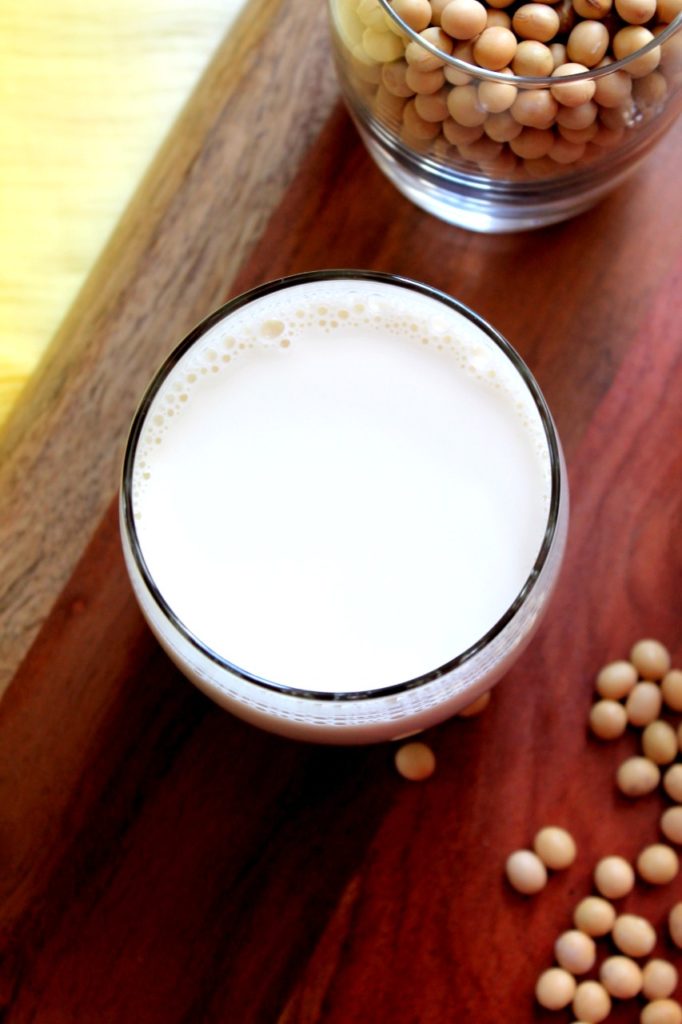 HOW TO FORTIFY SOY MILK

Here’s some of the ways I like to flavor my soy milk.

MAPLE SYRUP or HONEY or dates, for some sweetness

COCOA POWDER, for some chocolaty flavor

ALMOND BUTTER, for some nutritional value and added flavor

I use it in combination with other ingredients to form a dough for the flatbread, batter for the pancakes, sweet and savory pancakes, or use it in making the veggie burgers or kebab mixture.

You can also add some of the Okara back into the soy milk for added nutrients. Blend the Okara again with some soy milk and mix it with the rest of the soy milk.

Yuba is thin, delicate layer formed on top of the soy milk. When soy bean mixture cooks, the proteins and fat, float on top of the mixture, called yuba.

Yuba takes the flavors of the dish it is added to. Fresh yuba can be eaten as it is or you can add it to salads, pasta or even in soup, for protein, rich diet.

HOW THICK IS THIS SOY MILK

This soy milk is considerably thick, however, if you wish more thickened, texture milk, just reduce the amount of water to 4 cups instead of 5 while cooking the soy beans mixture. This will give you much more concentrated form of soy milk.

HOW TO GROW SPROUTS – LENTILS & BEANS

HOW TO COOK BEETS

HOW TO COOK PERFECT BASMATI RICE

HOW TO COOK DRIED CHICKPEAS

HOW TO STEAM BROCCOLI 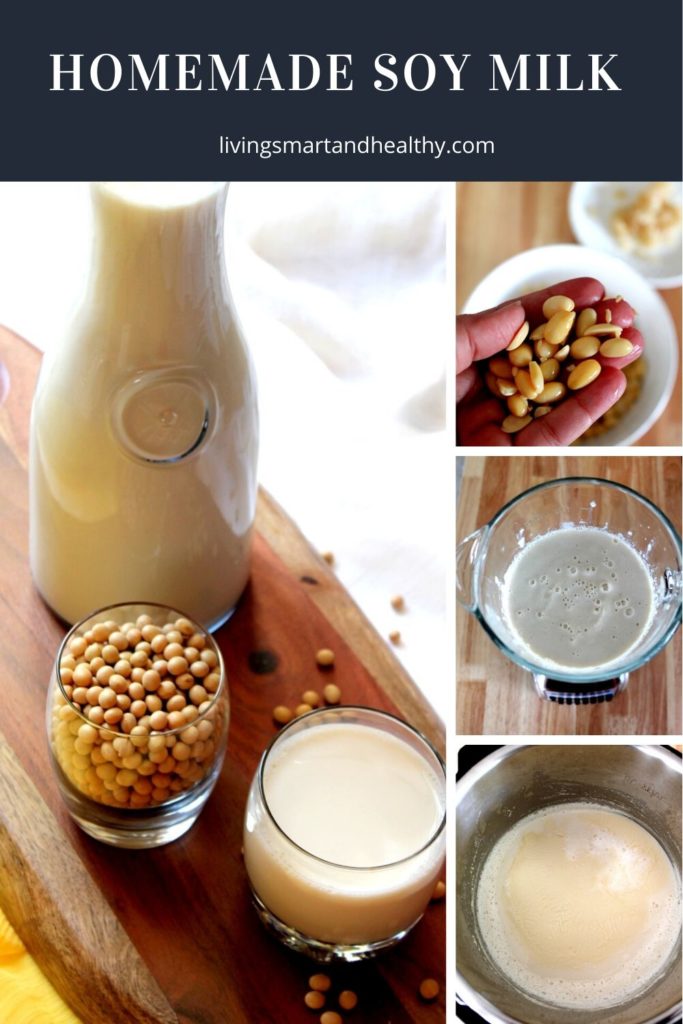 Homemade Ketchup – Made with fresh tomatoes

Sign up to get weekly emails with inspiration in your inbox.
Close Menu
18shares